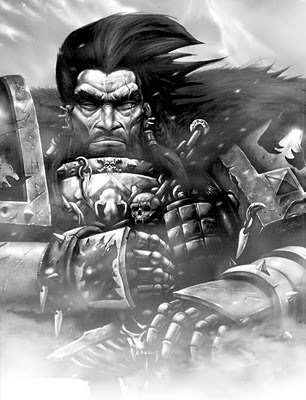 Here is the second of the Heroes from Antiquity for the Space Wolves.

Mordak is now a dead world; eons ago it supported an advanced civilization. When it was discovered by the explorers of the Adeptus Terra, the Techno-magi quickly recognized the importance of the technology found on Mordak. The Space Wolves of Hurgarl Stormbrow’s Great Company had been assigned to protect the world. Mordak lay deep within Ork-dominated space and it was not long before a large force of Orks arrived. A desperate war against time began in which the Space Wolves held the scattered excavation sites from the ever expanding force of Orks.

It was during this fighting that Durfast was to earn his place in the Sagas. Durfast lead the remnants of Hurgarls Great Company into the catacombs of Betan to kill the Ork Warboss. It was savage close quarter fighting in almost total darkness. Many Space Wolves died, but in the end the Warboss was killed. Leaderless the Orks were finally driven off. Thanks to Durfast the surviving Space Wolves made it back to the surface, evacuated the complex before destroying it with its own self-destruct systems.

One of the artifacts recovered on Mordak still resides within the Fang; the Iron Priests placed the artifact in a Space Wolf helmet. It has become known as the Helm of Durfast, the artifact utilizes temporal technology to endow the wearer with an uncanny awareness of the immediate past, present and future. This enables the bearer to anticipate the actions of his opponents.

Helm of Durfast: This artifact gives Durfast the ability to anticipate the actions of his foes; this ability has made him a formidable warrior.

The bearers save becomes Invulnerable. He may also re-roll any failed to hit dice in both the shooting and assault phases.
at March 29, 2010

Big Jim
I've been Wargaming since 1977, my dad was and is an avid gamer. I fell in love with Wargaming, and have an interest in many facets of the hobby! It's been 30+ years, and I am still going strong.