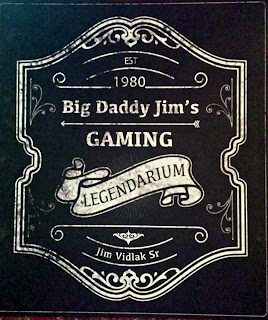 I grew up in wargaming, my Father was a gamer and all through my youth he would host games in our garage or at game conventions wherever we lived. He was a larger than life fellow that made every gaming experience a unique one with its own special flavor. Telling a story on the tabletop was always his goal whether it be a historical refight between Hannibal and his enemies or in some fantastical far off land.

Back in those hallowed days of the 70’s & 80’s there were not many shops where you could physically play within the store, almost everything was garage gaming. It was much more personal than it is for most people today. You were gaming with people that very quickly became close friends or disappeared as fast as they arrived. I can remember when my dad would want to venture into a new gaming genre him leaving our phone number on a message board in the local shops, so we could find likeminded gamers. Running games at the local conventions was also paramount as it always lead to new people to game with.


So now that I have shared a little piece of my personal gaming history with you, let’s get on to the concept behind what I will be doing with the blog going forward. My father passed away this past January and I have been soul searching a way to preserve and further his gaming legacy. I have decided to recreate the more intimate and personal feel of wargaming that I grew up with. I am slowly but surely setting my garage up to be a gaming destination as my fathers was growing up.

I will be playing games with old and new friends alike then document them here for all to see. I play a plethora of games spanning many genres from biblical ancients to the Dark Ages to the 20th century to fantasy & Sci-Fi worlds.

I will also be sharing more history about my dad and wargaming throughout the past 4 decades. I will also share what the name Gaming Legendarium means in a later post.