Warzone Resurrection is up on Kickstarter

I urge anyone who knows and likes the Mutant Chronicles Universe to support the Warzone Resurrection Kickstarter! Prodos Games has been extremely responsive to fan feedback, more so than anyone I have seen in recent times.

They just posted a new video on the card mechanics that Warzone will use.

So head over to their Facebook group and share your feedback! If you are not into FB, then head over to Dakka where they are also taking feeback!
at February 17, 2013 No comments:

OMG Warzone is being resurrected! 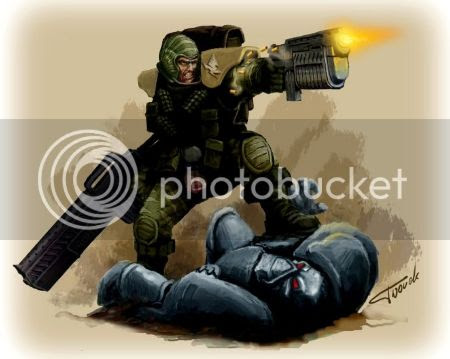 One of my favorite all time Sci-Fi skirmish games is on its way to returning to the wargaming world! This newest version of the game will be titled Mutant Chronicles Warzone Resurrection and after nearly a decade of being dead I am totally stoked to see its return.

Here is a short Teaser Video, very GWesk, but inspiring as a long time Warzone fan.

Here is the basic breakdown of the Universe.

The game takes place in a distant future where the Earth has long since been depleted of natural resources and abandoned. Humanity has spread to the worlds of Venus, Mars, Mercury, Luna (the first settlement following the exodus from Earth), and the Asteroid Belt.


Since the exodus from Earth the traditional nation-states of the world have merged into five huge megacorporations: Bauhaus, styled after the culture of continental Europe, the American-influenced Capitol, the Japanese-themed Mishima, the British-inspired Imperial, and the ultra-secretive, ambiguous , high-tech wielding Cybertronic, all of whom use private military forces to fight for resources. Luna (the Moon) itself is considered to be neutral ground and is home to the massive city-state known as Luna City. The other major power of this universe is the Brotherhood, a fanatical religious organization formed to meet the threat of the Dark Legion, an ancient evil comprising five "Dark Apostles" and their horde of hideous mutants and undead. The Dark Legion is the corporeal presentation of Dark Symmetry and minions of the Dark Apostles. The Dark Legion commands the most powerful armies of the solar system, including Legionnaires, resurrected corpses of fallen Megacorp heroes and footsoldiers alike; Necromutants, hideously modified humanoids; Centurions, the lethal lieutenants of the Dark Legion; and Nepharites, fearsome, towering behemoths of unimaginable power.


The reign of the Dark Legion began as mankind set foot on Nero, a fictional tenth planet beyond the orbit of Pluto, where they discovered a citadel. As they entered, the Imperial Conquistadors – a group of interplanetary explorers – accidentally broke the First Seal Of Repulsion, a thin ring of salt spread around the citadel. Inside, a mysterious iron plate was found, and as it was touched, the Dark Legion was brought to our dimension, and along with it, the Dark Symmetry.

The Dark Symmetry prevents computers, "thinking engines", and other electronic devices from functioning reliably, if at all, and initially caused complete chaos, and then a forced adaptation of the technology used by mankind. The Dark Symmetry also begins to spread plague, lies, illusions and war on the human population through Dark Apostles known as Demnogonis, Semai, Muawihje, Algeroth and Ilian, The Dark Mistress and most powerful wielder of The Dark Symmetry. Thus the first Corporate wars began. Only through the Brotherhood and its first Cardinal, Nathaniel Durand were the corporations pulled under one banner, driving back the Dark Legion and Dark Symmetry back to the void where it came. This however cost Nathaniel Durand his life as he fought and defeated Algeroth, the field commander of all of the Dark Legion and the master of Dark Technology. Dark Legion resurfaces as a milennia passes, old edicts to keep the evil at bay are broken and Megacorps begin the 2nd Corporate wars. Yet again Nero is explored and Dark Symmetry is unleashed. It was also during the period of 1000-year peace that Cybertronic surfaced and was first to break one of the edicts; Human must not create or use machines that think like man.