Hey guys, it's time to announce the info for the next BAO narrative event. Tickets go on sale soon, I believe Friday, but could be wrong.

Participants will help decided the fate of an Imperial Hive world and a secret Adeptus Mechaicus base in the Persiet system on the eastern fringe of the galaxy. Will the forces of the Imperium and the allies save the system or will it be subjugated or worse destroyed by the forces of Chaos and their nefarious allies.

Keep your eyes peeled here on GiF and on the Frontline gaming blog for more background as we drive the Narrative right up to the actual event.

The Forces of Order:
Anything Imperial
Eldar
Tau

Forces of Destruction:
Anything Chaos, including traitor IG should the need arise
Dark Eldar
Necrons
Tyranids (although not present during this fight per the fluff, they will count as warp creatures from the Daemonic incursion.)

Orks are a Neutral force that will be used to balance sides if need be.

Day One: Enter the Killzone

This will be a day of multiple Skirmish games utilizing the Special Operations Killzone set of fan made rules. These missions could be anything like probe the enemy lines for weakness or destroy an enemy communications station.

There will be 6 missions being run simultaneously; each will have a one hour “time limit” that way every player gets to play all on the opposing team. These missions are vital and the outcome of Day one will have bonuses or consequences on Day two.

Special Operations Groups
These will be full two team special operations groups with a max of 500 points, built out of the Killzone Codex Operatives in tandem with the codex for your army of Choice. (Codex Operatives will have the 6th ed list for the Chaos Space Marines updated by 12/15.)

This will be a large team run event (teams determined on the day of the event) fought over three different battle zones. Each table will be able to effect the others through the use of special mission objectives.

Allowed Armies:
Armies can be built from all current 40k codices including the White Dwarf codex for the Sisters of Battle, and may also include or be built to include units or completely using the army lists in the Imperial Armor books. Units and list may only be draw for Imperial Armor books 5-11, IA Areonautica and the IA Apoc books.

With that said all IA units and lists must use the most current listing for the unit, which includes the Errata listed on the Forgeworld site. So for example the Renegades and Heretics list from the Siege of Vraks uses the update on the forgeworld site.

All armies are built using the following requirements:
2000 points all armies must adhere to the standard Force Organization chart, you may use the double force organization choice if you wish; You may include allies and may include one super heavy vehicle with no more than 3 structure points. You may not purchase Fortifications; some will already be present on each table. I would also appreciate if all players bring a 500 point sideboard list incase the sides end up being lopsided.

At the beginning of the game each player will draw a strategy card from the decks that I will provide.

At the beginning of the game each player will draw a Fate card from from decks that will be provided. The Fate cards will add to the narrative of the game allowing each commander some special bonus during the game.

Each table will have a special character for each side created and provided by me. They will represent the army commanders of that theater for narrative purposes.

Both Events are subject to the following:

WYSIWYG:
All models are expected to be WYSIWYG as much as is reasonable. Proxies are not permitted. However, counts as armies are acceptable and encouraged. What’s the difference? That can be a tough call to make in some cases. Judges will determine what is acceptable or not and all judgments are final. If you feel your army is questionable, contact a TO in advance to clear any confusion.

Painting:
Every army must be painted to a three color minimum and be based. (basing can be as simple as painting your models bases an appropriate color.) We want a great looking event filled with painted models fighting over nice looking terrain.
at November 27, 2012 1 comment: 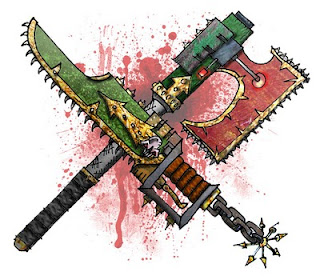 I have made a few more changes to the list after some more playtesting. I replaced the Vindicator after losing it's cannon in 3 games and replaced it with an AC/LC predator sporting a Dirge caster. Yup I got to expireince Flamers of Tzeentch in my backfield this weekend, the result was ouch!

I also ditched the Leman Russ for a reactionary unit of Terminators, they will protect the Warpsmith and can engage anything that gets in my backfield. I also used these points to give the CCW's to the Chaos Marine squads; I feel I need a leg up on those space marines I keep facing.

I also dumped the cultists for 2 more IG squads that will blob with a commissar. This should be much more effective than the cultists.

While I liked lobbing those three pie plates a turn I think this list in more effective.

Also I just want to point out the Defiler is a workhorse in this list! It really has been great; even though I still think it is about 15-20pts overcosted. That said it is really resilient now. It has only gone down in 2 of 6 games.

I need a little help 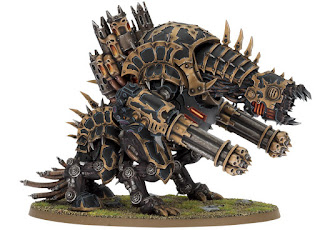 I have an idea for a Heldrake conversion to make it fit my idea of a daemonically possessed fighter as opposed to an actual dragon. I just cannot take the stock model seriously in my traitorous heart.

I need a few bitz from the kit pictured above.

So far I have not seen the new chaos models bitzed out. What I am looking for is someone willing to part with a spare set of the following items: Lasher Tendrils and a Ectoplasma head from a Mauler/Forge Fiend kit.

I don't have a desire to pick up or field either of the Fiends in the near future. So I'd be willing to trade or pay for the parts or accept a donation of them.

Thanks for reading my abnormal request.
at November 12, 2012 5 comments:

Here is a repost of the question I asked yesterday on the Frontline gaming site. Please vote, but only if you plan on attending event.

Hey everyone, we’re gearing up for the BAO 2013, and will have all the pertinent information up by the end of the month. Big Jim, the gentleman who runs the 40K narrative event, has a question about the structure of the event.

Hey Guys,
Jim here your friendly neighborhood narrative event organizer with a question to those interested in Day 1 of the BAO event.
The battles taking place on the first day are probing actions meant to test the enemy lines for weakness. I want to put forth two options for handling these phase of the event.
The first option would be to use the 40k skirmish game that I authored and was run at the past two Adepticons. Special Operations Killzone, is a refinement of the ideas that GW put forth in Killteams. Using Killzone will allow all players on the fist day to square off against all players from the opposing side. This event would use the 2 team format with Operation groups of 500 total points.
Links to the Killzone rules:
Rulebook: https://www.box.com/s/6rok2xkf75xneaeu9kex
Codex Operatives: https://www.box.com/s/56fuyjocojhet3vblr7r
Mission/Fate Cards: https://www.box.com/s/9ma7vknk3lmm241418f1
The second option would be to run the event as Combat patrol. Using last years Adepticon version as the basis for the rules, with the exception that the armies will have 500 point values.
Please post your preference below; we will collect votes until 18th of this month. Now I leave the choice in your hands.

Please head over to the Frontline Gaming site and make your vice Known!
at November 10, 2012 No comments: 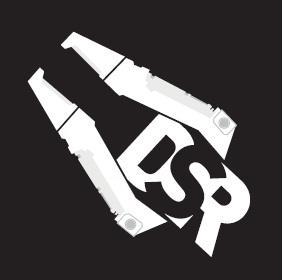 Hey guys with Chris leaving Deepstrike Radio, I have had to step into a much more prominent roll for the podcast. I am taking over as the "public" face and point of contact for DSR; plus I am doing a lot more of the behind the scenes content as well.

DSR is running an open casting call in search of a new third chair host. If you are interested follow this Link.

Most of you will have noticed that The Codex Project site has been down for a few weeks. I have spoken with Jeff and he plans to have it back up shortly. With a new straight shooting podcast episode to follow shortly.

I will not be doing my podcasting with my friends idea anytime soon. I need to settle into my new duties at DSR before I can even start thinking about it again.
at November 07, 2012 No comments: 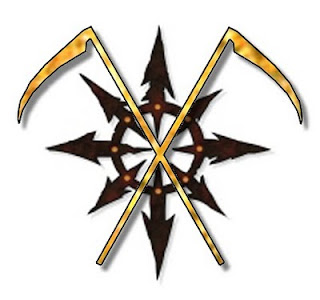 After having a long chat with my buddy Magilla Gurilla I have made the following changes to the list from yesterday.  While I hate to lose the Terminators (Cause I am a terminator freak) and Land Raider, I think the list has a lot more moxie, than the last one.

Basically the two HQ's got some useful wargear, I added 6 Nurgle bikers with 2 melta's to replace the Termies. For the Land Raiders cost I gained 16 traitor guard bodies including Marbo, 2 autocannons and 6 flamers. I also dropped the 3rd five man marine squad for 20 cultists and upgraded to a TLLC turret on the Predator.

In the end the list gained 31 infantry models, which are basically cannon fodder, but they should tie things up long enough for the armor and marines to do what they need too to secure victory. 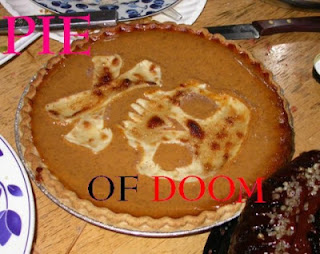 I have decided to try making the Chaos Marine army focused on shooting rather than my more typical in the enemies face style of list. It is also high time I start utilizing Allies and Fortifications

As you can see I have 6 armored vehicles, which most would say is suicide in 6th, but I am not so sold on the idea. Most of my armor is AV 13 or 14 on the front and since I do not plan to rush forward I won't have to worry early on about melta's doing me in. .

I am looking forward to throwing 3 pie plates of doom a turn! Should be pretty effective since so many gamers have abandoned their armored pillboxes.

I will be deepstriking the Terminators to cause a distraction in the enemy backfield and using the Land Raider as an AV 14 anti-tank platform. Then late in the game mount up one of the Marine squads if need be and grab an objective.

I'll be using the Warpsmith to keep my armor up and running as long as I can.

I decided not to take a Heldrake as I feel the Vendetta is much more utilitarian. Equally good against both air and ground targets.