I cannot believe I forgot to post this, it has been sitting as a draft for a couple of months. Sometimes I would lose my head if it were not attached. lol

Here are 10 cowboy miniatures I painted for Carl from the Independent Characters. I am really pleased with the way the turned out. They are Black Scorpion miniatures and were a joy to paint!

I am working on some ruined buildings for the CelestiCon Narrative event. I like my buildings to be on the more realistic looking side. Festooned with lots of rubble and debris, it looks fantastic on the tabletop. Problem is most gamers go bonkers due to functionality with miniatures in game.

So I am debating a compromise, strew sand all over the interior with minimal debris near the actual walls, but then make rubble inserts to place in the buildings for when infantry and tanks are not inside. Similar to what we do with removable trees for forests.

What do y’all think, should I compromise to cater to everyone or should I just go nuts and go old school then say the heck with playability since it will look Kool!?! 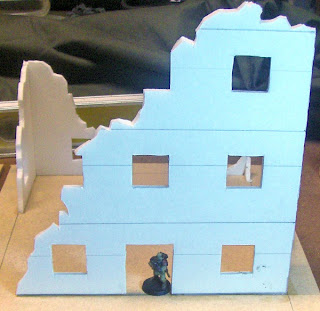 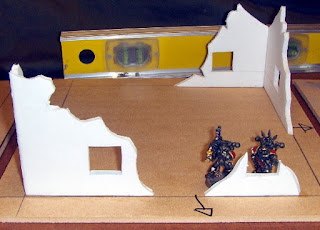 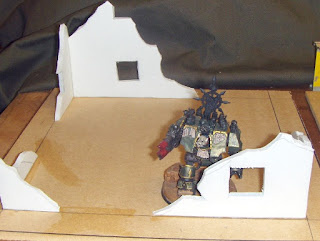 Test model for the DSR Tale of 6th ed gamers

Here is the tester Renegade for my Siege of Vraks Renegades and Heretics list. It is the first model in my Deepstrike Radio Tale of 6th Ed Gamers army. Head on over the the Custodes forum to see other great armies being built or join in the fun! 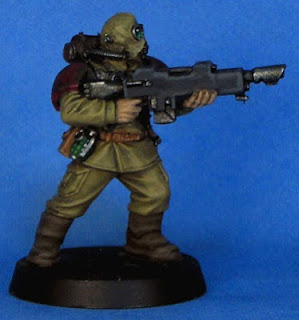 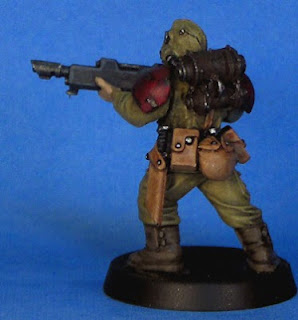 I must say that after picking my jaw up off the table GW have knocked this starter outta the Fraking park! Finally Chaos Marines that look warped and twisted properly exhibiting the Rogue Trader awesomeness of the originals.

It is a great time to be a heretic!

Background for the CelestiCon Narrative Event

Come join me for the Battle of Denari narrative event in Fremont Ca at CelestiCon.

Set up will be begin at 10AM on Sunday the 2nd of September.

Relevant player info can be found on the CelestiCon website.

Here is some of the Background leading up to the event.

The battle for Denari

Denari is lies in the galactic north east of Segmentum Ultima near the Centaurus Arm. It is always dangerous on the galactic fringes of the known space, but the resources that they hold make these planets important to the engine of the Imperium. Denari is rich in the raw makeup of Promethium and also is the most pure source of Adamantium on the eastern fringe.

If you were to view the planet from space it looks like nothing more than a forgotten backwater world with little to offer in plunder. This is a strategic ploy; almost all Denari’s industry is subterranean, as is most of the habitation. The only two things that are remarkable from orbit are the capital city of Kalfor and the refinery complex on the western reaches.

The planet would have probably remained a secret if it were not for the Echo of Malice a Chaos heavy cruiser being severely damaged in an ambush by the Imperial Navy. It narrowly defeated its foes and needed to repair its Gellar field generators. The Echo of Malice is the warship of Aris the Seeker from the Soul Reapers Chaos Marine Warband.

They ghosted a transport fleet to Denari, knowing that they would be able to get what they needed to repair the Echo of Malice. While the ship had no Gellar field and could not Warp jump, it was fully battle worthy. The Chaos ship made short work of the meager system patrol vessels and made a run on the orbital loading docs above Denari.

Scanning the planet and seeing the transport ship activity in the system just did not add up in Aris’ mind; so while his men secured the loot to repair the Echo, he headed to the command deck with his Warpsmith in tow. Once the slaughter on the command deck was done the Warpsmith got to work, pulling every bit of data they could from the stations computers. With their task complete Aris commanded the Echo’s gunners to obliterate the orbital dock.

Upon reviewing the data Aris smiled a devious grin, knowing that Warlord Krüg would be very pleased with the information that he is bringing.

Forty five days later the governor of Denari received this message from the edges of the system.

“Abandon hope for I am Death Incarnate and my Soul Reapers will descended upon this world to show you the power of the eight fold path; let the reaping begin!”

Two days later the entire planet was under the Warlords complete control. He then put the planets refineries and mines back to work to fuel his mighty dark crusade.

Fifty five days later an Imperial relief fleet lead by the Space marines of the Carcharodons chapter arrived at the edge of the system. There was little sign of a traitor fleet other than a dozen Chaos Raiders patrolling close to Denari. They were easily brushed aside by the Imperial fleet. The following exchange took place immediately following the destruction of the Raiders.


“Traitors, we have smashed through your pathetic defense fleet, soon you shall choke on your blood. Our forces shall strike hard and fast where you least expect it. Prepare to pay the ultimate cost for 10000 years of treachery. Know this the Carcharodons will not rest until the last drop of your blood is spilled and your black souls are sent back to the warp.”


“Better check your long range scanners again lackey! You should have been more diligent in your scanning of the system when you entered it, for you are now cut off and will be surrounded shortly. I do respect your bloodthirsty nature, at least you may be a worthy adversary; something that I rarely see in you weak bloods. I invite you down to the capital of this backwater so I can test your metal personally. If you prove worthy I promise to take your head as a trophy.”


“You sprung your trap too early Traitor, for the Ultramarines are only a few hours from arrival in system with an entire Imperial navy battle group. All I have to do is keep your ass facing the outer system for our main fleets’ arrival. I think I can handle that task more readily than you think, so do your worst. We shall spill your blood amongst the stars and then I come for you!”


“Bold words weak blood! Let us see who is still standing at the end of this day.”

I appologize for the silence about the 6th ed update, I have been busy with commissions, dealing with tendonitis and learning the proper way to play 6th.

I have been asked many times in the past week about the release date for the update and to be honest I don't have a date set in stone. The plan is by mid to late September, cause I'd like to make it a solid update. I still need to format the changes and re-write some of the rules to fit with 6th.

The initial release will probably be very basic as I need to shoot a bunch of photos for the new book and my time is extremely limited right now.

If anyone is good with photoshop and wants to lend a hand with some of the pics would be welcomed. If you are interested in helping out with that just shoot me an email. Credit will be given as always. Son of Dorn has asked  bunch of us for help compiling questions for these updates to forward to GW.

We have been hearing, that Games Workshop is going to be coming out with more in-depth FAQ/Errata in the next month or so for 6th edition. What we want to do is to start gathering questions that seem to fall into the category of needing a answers.

So that is what this post is. Any serious questions that you feel need to be answered can be posted in the comments, then we will collate them and we will get them into someone that matters at Games Workshop.

The purpose of this is not to bitch, moan or complain, but to really help our game with the hope that we will somehow, just maybe get these viewed by someone that matters.

So if you are interested, lets get them going. If you think a question can be easily answered that someone has asked, please do not answer questions even if they seem like no brainers. It will help the community as a whole if we can get these questions answered.

Remember the only stupid question is one that is never asked.

Here is Snake's finished Perdita crew plus friends. They were heaps of fun to paint, unfortunately it took me a bit longer to finish them as I am struggling with tendonitis in my right forearm and wrist. The minis are trucking their way down to SoCal as I type this. 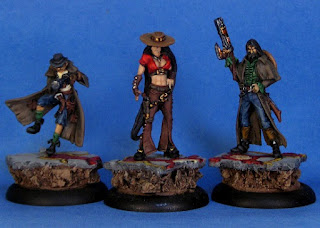 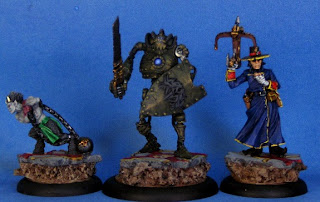