The Night Lords playtest codex is up on TCP

I wanted to share the news that we have a new fandex offering over at the Codex Project for the Night Lords Chaos Marine faction. Many months and hours have been put into this fandex to make it really have the right feel to represent the Night Lords on your tabletop.

I'd really like to thank and congratulate Seregon and Talos for all their hard work on this project. Good job guys! They are waiting for your feedback to help make sure that the codex is balanced and plays well.

So head on over to the Codex Projects Playtest page and check it out! 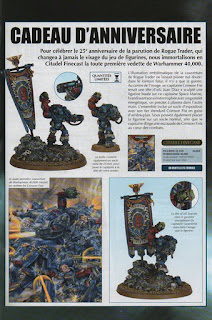 Oh, yeah this is one outstanding looking dripping with nostalgia and old school miniature. Reinvisioned from the Rouge Trader cover art, very appropriate!

To be released on the 25th of February, although the actual anniversary is not until September. 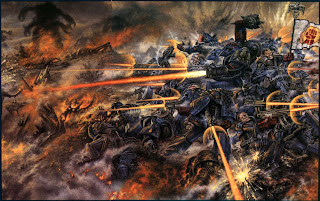 Ok guys, I have been holding off on posting this until I got some practical experience with the “leaked rules.” I am of the opinion that they are an unpolished set of playtest rules for the actual 6th edition of 40k. They have obviously been playtested but are still lacking polish and clarification of many rules. With that said I do imagine a lot will have changed or been smoothed out by the time we actually see the release in July.

I will not be doing a breakdown of the rules here, since it has been done many places such as on the Frontline Gaming and Sons of Taurus blogs. I am going to share my experiences in the 5 games we have played; including the few weak places in the rules that I am sure will be fixed in the actual book.

The first thing I want to point out is that the game plays much faster we were easily shaving 45 minutes off of a 2000 point game. So far I have used Chaos marines and IG against Orks and IG. Of all the armies I think the Orks get hit the hardest with the changes especially now the close combat attacks are AP 6.

The new Assault before Shooting turn sequence is pretty ace too. It really makes you think about where you want your units to be ahead of time. Speaking of assault, it sure did get much more deadly to lose an assault even if you happen to escape your opponent, since just being broken within 12 inches of an enemy removes the unit from the table. Wowzers that really does speed things up!

The new Evasion chart and modifiers make shooting more effective, what a concept in a sci-fi wargame. Couple this with the new cover save, Rapid Fire and Multi-targeting rules, then bam shooting becomes more deadly.

We are elated with the fact that cover saves drop to a much more balanced 5+ for most things; even my buddy Kev who plays Orks agrees with the change.

The new missions rock with the multi-layered victory conditions. Loving the overhaul to Kill Points, with the point value of the unit issuing multiple KP’s is an excellent mechanic; plus it is something we have been doing for a while here already in my little group. Objectives now make sense and mirror closely to what we have been doing for two years. They are now scored every turn, and anything except vehicles can claim them, but scoring units gain more points for holding an objective.

Now here is the bad part about Objectives that we are sure is missing from the doc, but will be in the final version. According to the PDF there is no way to contest an objective and people are interpreting that you and your opponent can claim the same objective at the same time. Come on guys use your heads that is what they are for after all; that makes zero sense and why would GW do that.

My prediction will be that any unit including vehicles will be able to contest an objective when the final rules are released.

Stratagems are pretty kool too, but can be a bit powerful. I imagine that these will be much more refined in the final rules. That said the bidding mechanic is a weak point in the PDF, don’t get me wrong I love the concept, but something just does not feel right. First turn does not seem to be as important as it once was, so really it seems that bidding is more for stratagem denial more than anything else, so definitely feel like a weak point.

Overall these games have been fantastically fun, more fun than standard 5th has ever been in my eyes. They also feel much more Cinematic really leading to the game feeling like the 40k Lore that you read in the novels! The early rumors were that GW was going to make 6th ed much more narrative in their feel and these surely do just that.

Well that is it for part one, in part two I will explain why I think that Defensive Fire is a “Keystone” mechanic to these rules, which the vast majority of the internet does not seem to be able to wrap their minds around.

There seems to be some sort of issue with the current downloads on the Codex Project page, so I am making a secondary set of links for the current PDF's.

Feel free to leave any feedback, comments or questions here in this post.

Killzone V3 2012 update available and news for the future 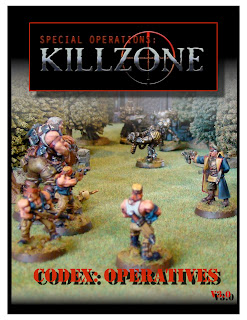 That's right all the hard work pays off with the official release of Killzone V3. It has been a laborious process, but it has paid off tenfold. The game is a much more solid system totally appropriate for those wanting to play competitive skirmish games of 40k.

Just a note the errata has now been renamed Codex Operatives, very fitting!

I'd like to extend my thanks to Brian, Skarvlad, FrozenJoe and the rest of the guys that helped out with V3.

With these basic rules in the can I can start working on the Advanced Killzone and Campaign system.

The Campaign system will include an experience system and new comprehensive skills list. I will probably draw some ideas from Necromunda and Mordheim.

Looking forward to the development of the advanced game things that you will see are the following:

1 The return of Priority.

3 Specialized Wargear for each army in the Codex Operatives tailored to the actual race.

5 Stacked saves, so if your model has an invul save and armor save he will benefit from both.

6 The complete removal of the cover save mechanic with the reimplementation of cover to hit modifiers for shooting. I have always been vocal about detesting the cover save mechanic, it makes good armor saves or AP irrelevant; besides bushes stopping bolt rounds is just plain stupid. Now before you start gnashing of teeth remember that a natural ‘6’ always hits in Killzone.

7 An in game card deck for random circumstances to enhance the narrative feel of the game.