The Problem with Chaos marines

The basic Chaos Marine easily has the best loadout of gear in the game, but it looks like that is about to change.

I'm not usually someone that gripes, but this seems to be stuck in my head. So I thought I share my thoughts on the topic.

The most recent rumors about Space Wolf Grey Hunters say that they come with Ubergrit (Bolter, Bolt pistol and close combat weapon)load-out and grenades in the new dex. Plus they have ATSKNF, Acute senses and Counter charge for 15 points a model.

Then compare this to the basic Chaos Marine who comes with the Ubergrit load-out and grenades, with Zero special rules for 15 points. The chaos marine has one higher LD and a CCW over the codex marine, but this does not make up for the 3 special rules all codex marines have. The icons don't count either as they are a buff that must be paid for and can be lost in game.

So if the rumor is true the Space Wolves are underpriced, Codex marines are about right and Chaos Marines are overpriced by a few points.

I know we are in a transition phase for 40k, but GW need to pick up the pace fixing armies. The new design philosophy seems to be killing the balance there was in the points system.

Here's what I don't understand. For ten thousand years the Chaos marines have been living on worlds infested by Hellish daemons and fighting an endless war; plus they were once a normal Space Marines. So why do they not have a special rule similar to ATSKNF or fearless?

All CSM's should be fearless or have a special rule that takes this into account, and the Icon of Chaos Glory should have a different effect.

With this all said I'm not giving up on my Chaos marines. They are still quite a good army, but I will be addressing this issue when I do the Soul Reapers Mini-dex.

So what are your thoughts?

Here is the squad I'm painting this week. The goal is to have them done by Saturday. They are all individual and about half have minor conversions.

Lair of the Soul Reapers is open 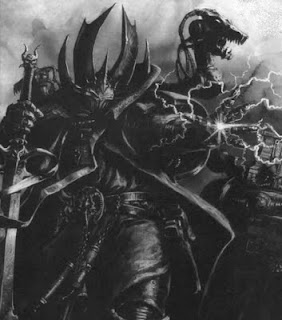 I have decided to split my Soul Reapers Fluff/Background material off to its own Blog. This way nobody is forced to read my fan fiction and Galaxy in Flames can solely focus on modeling, painting and gaming.

So if you are interested in my fan fiction by all means check out the Blog. Feel free to comment good or bad I just ask to please keep any criticisms constructive.

I should have a healthy painting update sometime in the next few days, keep an eye out for it.
at August 23, 2009 No comments: 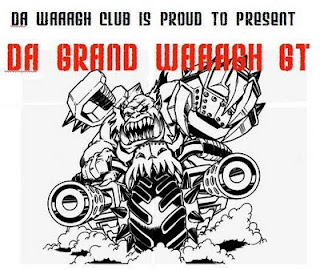 I want to promote a local game clubs inaugural Indy GT. Da Grand Waaagh is being held in October in Alameda on the USS Hornet, in the San Francisco Bay area northern California.

I'm looking forward to participating in this GT.

So I'm passing on this info along to the 40k corner of the Bloggosphere.


The battle will take place on the U.S.S. Hornet Museum in Alameda, CA,
October 2 - 4. Two fighter planes will block off our gaming tables. Not
only are we playing on a WW2 aircraft carrier with lots of history, we are supporting a non-profit organization.

We are currently limited to 160 spaces for Fantasy and 40k. Please send
this out to any clubs or friends that would be interested and contact us
if you have any questions. Please spread the word out to any and all as Da Waaagh Club is working hard to make this GT happen and to make this an annual event in the Bay Area.

We look forward to seeing everyone there.

Thank you and best wishes, 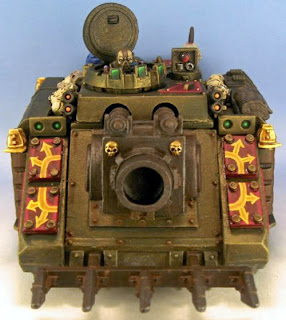 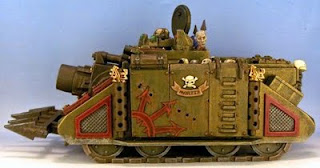 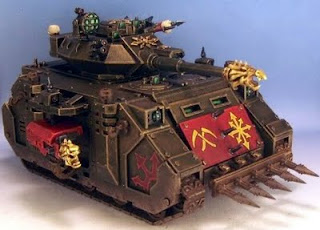 It's high time I advance the Soul Reapers from table ready to finished miniatures. I've been working on these guys on and off for two years and only have a handful of completely finished minis. I've got an army of blocked out Chaos marines, as I won't put unpainted minis on the table in public. The problem is I stopped working on them at that point for the most part.

It's time to jerk them brushes outta the holder and get back to work. I am looking at going to an Indy GT in October and am not willing to lose points on crappy paint work.

Here is the list I'm planning on using, so these will be the first minis that need finishing!

You can expect a flurry of updates in the next month and a half. I should have these guys done just in time for the Space Wolf codex release, so I can focus on building my new Wolf army on the other blog.
at August 18, 2009 No comments: 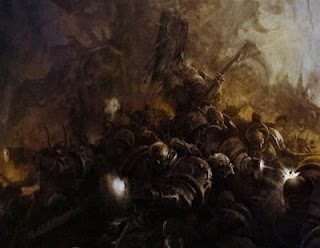 I have a few little updates on various things I'm working on pertaining to the Soul Reapers Chaos Marines.

First up I've enlisted a buddy of mine to help me flesh out the background fluff for the Soul Reapers. I am really excited about this, just wait until you see some of the stuff we are working on.

Secondly I'm thinking about making a Soul Reapers mini-dex like the ones seen on BoLS, for use in casual games. Are you guys interested in helping bang out some of the finer issues like points costs and the like?

Here's the fist of the new units, I would be adding to the mini-dex. They are troops, but like lesser daemons they don't take up a slot. The points value is a work in progress, what do you think should they be more expensive?

Rage of Khorne:
Due to insatiable rage and hate, Rage Zombies must move every turn. While the Skull champion is live they must move toward the closest enemy unit. If the Skull Champion is killed they become uncontrollable moving and attacking the closest unit friend or foe.

Hard to Kill
Rage zombies are extremely resilient and difficult to take down. To represent this use the rules for Feel no Pain on page 75 of the MRB with the following changes to the dice roll. On a result of 1-4 they are wounded as normal on a result of 5 or 6 the injury is ignored.

The third thing of note is the head for Klytus showed up this evening. Painting will commence tomorrow! 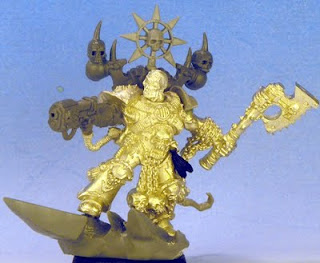 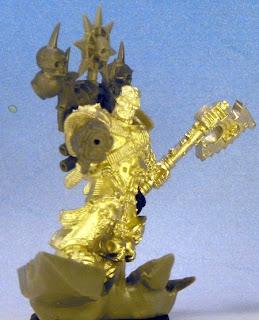 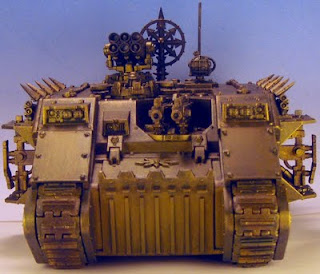 It's too hot to paint today since my AC is broken. So I’ve decided that it is time that I finished Klytus the “Unhinged” my counts as Kharn the Betrayer conversion I planned to start ages ago. I love the detail in the Kharn mini and decided to use the body as the base for the conversion

Here’s the original Kharn mini that I painted back in the dark days of second edition. 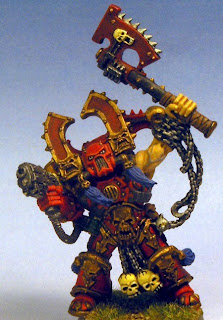 Here is the mock up of my new improved Kharn, I mean Klytus. I think it makes the old static pose look more dynamic. 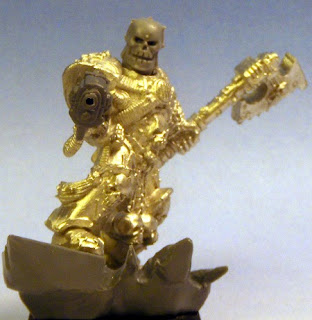 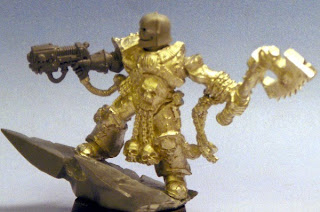 The head is a place holder until this one arrives. 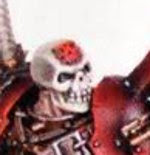 Here are the first two replacement Aspiring Champions for the Soul Reapers.

Both are armed with a Powerfist and a Bolter. 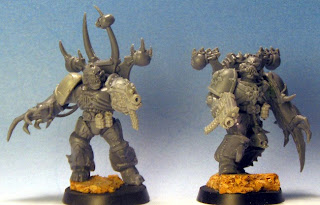 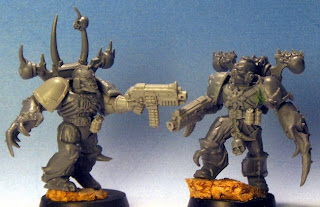 I think they are going to be a fantastic addition to the Reapers!

I've decided to do these three options. 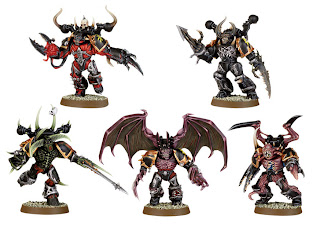 I just came into a free box of Possessed Chaos marines, I also have an unopened box of Chaos maarines. I'm not fond of the rules for the possessed so I figured I wouuld combine these fantastic models with standard CSM's to make Aspiring Champions.

I have 4 squads of standard CSM's, a squad of Zerkers, and a squad of Plague marines. Each of these have a Champ already, 4 fists w/bolters and 2 Pweapons with bolters. I want each squad to have three champ options, the two options I am cetain of is the fist w/bolter and Pweapon bolter.

So I need ideas for the third option. Weapons available are Plasma pistols, combi-weapons, Pweapons and Fists. I like the comi-flamer as an option, but should he carry a fist or Pweapon?

All comments are greatly appreciated.
at August 06, 2009 3 comments:

I have been given an offer I couldn't refuse, and Galaxy in Flames will be taking a slight change in direction.

Adam who runs the Space Wolf blog has decided to focus on his Tau for 40k; he just doesn't have the time to put forth what he feels is the right ammount of effort to do the Space Wolves blog justice.

So I will be moving all my further efforts with the Space Wolves over there. It will be a way to really showcase them.

What this means for Galaxy in Flames is that I can gear the focus completely to my Soul Reapers for now. Eventually expanding it into all the enemies of the Imperium of Man.

Sitting in the wings I have Eldar, Necrons, Traitor Guard and Nids just waiting to get some painting time. So fear not Galaxy in Flames will have plenty of good stuff for years to come!