Only an 2 and a half hours left until the DSR 6th ed live show.

Quick correction to the time, I was early by an hour. The show will begin at 5PM PST and 1AM GMT, sorry for any confusion.


Live video for mobile from Ustream

Here is the feed for the show for convenience.

We are pumped so please join us for this special event! Here's hoping it goes off without a hitch! 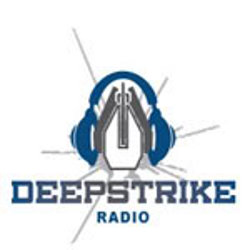 Hey guys we I wanted to let you know that Deepstrike Radio will be doing a live launch event for 6th edition 40k via Deepstrike TV on Ustream on the 30th in Australia/29th in the USA.

The stream will begin at Midnight GMT, 10AM Australia time and 4PM Pacific time.

Chris will be playing a live game with his buddies Adam and Pat. Pat was on the Queensland ATC team that won the event.

While Chase and I will go over some of the background changes, plus may delve into some of changes in the core rules as well.

This should be an extremely fun event.

Email ThisBlogThis!Share to TwitterShare to FacebookShare to Pinterest
Labels: Podcasts

Killzone and the Future

First off I would like to thank everyone that has been involved in S.O. Killzone and supported the game from the get go. I also want to say a heartfelt fond farewell to Brian and good luck in all of your future game design endeavors. I appreciate the help you gave and all the work you have done for S.O. Killzone more than words can convey.

I hate for it to end but end it has.


S.O. Killzone will go on as S.O. Killzone: Events once its 6th edition update is done and dusted. After that is completed I will finally be able to focus on the more narrative version that I had planned to do from the very beginning of this long two year road.

This will be Killzone: Evolution,  the next logical step in skirmish gaming for the Warhammer 40k universe.

Where Special Operations Killzone bent over backward to allow existing 40k players an easy transition into skirmish gaming; Killzone Evolution might have a bit of a learning curve for many of those same gamers.

Killzone Evolution will use an action based alternation activation turn sequence. Each model will have a set number of actions that they can perform when “activated.” More to come on this in a future post.

Then finally we will have Killzone: Forlorn Hope that will pit players verses hoards of aliens or zombies. This will be a supplement that works for both the Events and Evolution systems.

So as one chapter ends a brand new one begins for Killzone.

The forces of Chaos has wrested control of the Denari system on the Eastern Fringe. Denari is a valuable Imperial resource planet and must be retaken at all costs. Control of the Promethium and Adamantium mining facilities are key goals to the campaign.

The lack of an Imperial Fleet presence has brought many forces to bear on the world in an attempt to capture its resources for their race. There have even been void skirmishes with scouting elements for a Tyranid hive fleet in the outer reaches of the sector.

Come join us for a fun filled big game of 40k!

Allowed armies:
Armies can be built from all current 40k codices including the White Dwarf codex for the Sisters of Battle, and may also include or be built to include units or completely using the army lists in the Imperial Armor books. Units and list may only be drawn from Imperial Armor book 3-11 and the IA Apoc books.

With that said all IA units and lists must use the most current listing for the unit, which includes the Errata listed on the Forgeworld site.

Armies are built using the following requirements:
2000 points using the normal force organization process and may include one superheavy vehicle from the Apocalypse rulebook or an IA book it may have no more than 3 structure points. Each army may also include one Spearhead formation as listed in the spearhead rules on the games workshop site.

Narrative gaming cards:
At the beginning of the game each player will draw a strategy card from the decks that I will provide.

At the beginning of the game each player will draw a Fate card from from decks that will be provided. The Fate cards will add to the narrative of the game allowing each commander some special bonus during the game.

Painting:
Every army must be painted to a three color minimum and be based. (basing can be as simple as painting your models bases an appropriate color.) This is not debatable, we want a great looking event filled with painted models fighting over nice looking terrain.

Objectives will be scored at the bottom of every game turn. Objectives held by a troops choice are worth 2 points, any other unit may score objectives with a worth a value of 1 point gained.

Bogged Down:
This rule replaces the current rule for when a vehicle moves in difficult or dangerous terrain.

When a vehicle enters difficult or dangerous terrain some times they become temporarily immobilized; stuck in the terrain they are attempting to cross. These vehicles are referred to as Bogged Down.

Follow the normal procedure for vehicles moving in difficult or dangerous terrain; if they get bogged down place a marker next to the vehicle.

A bogged down vehicle may remobilize at the start of any of its turns by rolling a 4+ on a D6. They may function as normal from that point on, including making a test for difficult terrain if they want to move.

Dangerous Terrain Test:
Dangerous terrain tests will usually remove a model as a casualty if they roll a 1 on the D6 test. This test is changed to the following.

If the model fails the dangerous terrain test it is only removed if the model fails its saving throw (Armor or Invulnerable). Feel No Pain may not be used to save a model from failed saves in this case.”

We are in the middle of making a players versus a GM style supplement for S.O. Killzone. I have been playtesting it myself and have had good success and am about ready to send it out to others to playtest.

I have decided to call the supplement Forlorn Hope it is an old military term that was made popular during the Napoleonic wars.


Forlorn Hope: A forlorn hope is a band of soldiers or other combatants chosen to take the leading part in a military operation, such as an assault on a defended position, where the risk of casualties is high.

This supplement is meant to pit teams of special operations groups into desperate fights versus the likes of a Daemonic incursion, Tyranid invasion or even a Zombie apocalypse. Your teams will work together to accomplish mission goals and hopefully survive while doing so.

This supplement works best with 2-3 players with one player acting as the game master running the adversary creatures.

This supplement will also give you the opportunity to play single player games of Killzone by utilizing a random creature generation dice and card mechanic in conjunction with random creature movement system. For those times that you or your buddies don't have a game master handy or just all want to play as the good guys.


I am very excited about this supplement it has been tons of fun to play so far, so plenty of great stuff in the future for Killzone!

I have submitted and am hashing out the final details for another narrative event this time at CelestiCon in Fremont CA. This will be another "Big Game" of 40k similar to the event ran at the BAO; with some slight revisions. This Event will happen on Sunday September 2nd, during the Celebrating 25 years of 40k event I created on Facebook, a week to play some great 40k games and share our memories of the good times we have had. Maybe even try busting out an old edition and play a nostalgic game, basically anything goes as long as we share!.


The background for this event is directly linked to the BFG campaign I just finished up. The forces of Chaos have wrested control of the Denari system on the Eastern Fringe. Denari is a valuable Imperial resource planet in the sector and must be retaken at all costs. Control of the Promethium and Adamantium mining facilities are key goals to the campaign.

The lack of an Imperial Fleet presence has brought many forces to bear on the world in an attempt to capture its resources for their race. There have even been void skirmishes with scouting elements for a Tyranid hive fleet in the outer reaches of the sector.

Here is the first of a few drifting hulks for my Chaos fleet. This started life as a poorly built ebay model. Thanks to my buddy Kev for converting this for me, the details are great!

I can think of lots of ways to use this model, it can be used to represent the first hulked out ship in a battle, or as part of the space "terrain".
at June 08, 2012 No comments: 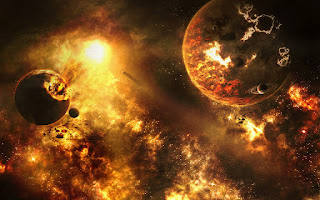 The Denari system falls as the Imperial Navy and Eldar pirates in the sector are sent running. It was not an easy fight and the Chaos armada of the Soul Reapers has sent many ships back to the orbital docks above Ehdan for repairs and refitting.

Warlord Krüg has transferred his command from the Battleship Eater of Souls to his Battlebarge the Death Incarnate as the warbands Battlebarges, Legion Strike cruisers and light Strike cruisers arrive to bringing their full Astartes might to bear to begin culling of the systems resources.

Here are some pics from the final battle for the system as the Chaos Fleet overruns the Imperial Navy rally point. 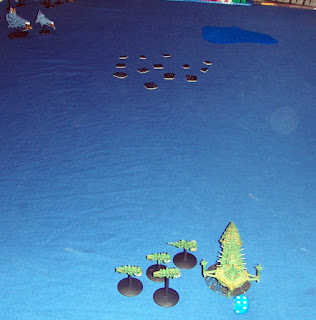 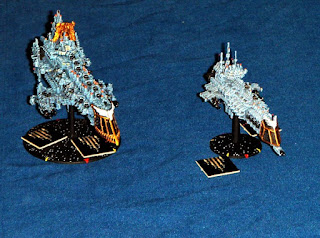 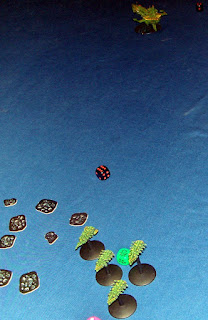 My father has been in town all month, he leaves Tuesday morning; we have been running a BFG campaign to determine the fate of the Denari system. I must say after personally playing about 14 games of BFG in the last 4 weeks I don't understand why any fan of 40k is not playing this game. It is an absolute blast to play and really easy to learn.

So far the forces of the Imperium have been brutalized at the hands of Chaos and Eldar pirates, but the Eldar do not discriminate and have manhandled the forces of Chaos as well. Damned pointy eared bastards!

That said the title most deadly ship goes to the Repulsive class Grand Cruiser the Betrayer. Holy crap this ship has single handedly killed or crippled a total of 13 cruisers with one salvo from its weapons batteries and lances. To top it off the ship has not been crippled once in the entire campaign.


I will be posting pics from the final two or three games sometime tomorrow.
at June 03, 2012 4 comments: