Keeping the fun of 40k alive in the Man-cave 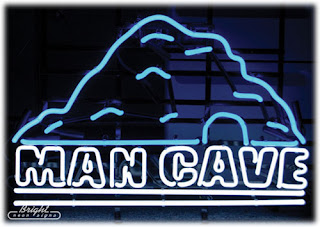 Fritz from Fritz 40k posted on his blog the other day opining about the fun of the good old days during the early editions of 40k.

I agree the good old days seemed focused on fun and it was fun to play 40k back then. With that said I would say that the game can be just as fun today as it was in the past.

It is all in what you and you opponents expect from the game when you go to the table. I have surrounded myself with gamers who are into 40k for the background of the universe. This has a tendency to create a really fun atmosphere to game in. While everyone likes to win their battles none of of are focused on winning we tend to focus on creating great stories on the tabletop.

We also have a tendency to change up the game with simple house rules or guidelines to help the cinematic events in game.

The first thing we do is run lots of ongoing campaigns. This has a tendency to create cool story lines for our games. We also smack talk before our sessions telling the tales of our latest victories from out previous games.

We also tend to run about half our games as Attacker/Defender scenarios. With the Attacker gaining a 25% points advantage. The Defenders gain their own advantages depending on the scenario being played.

Second we have thrown out the Force Org for army building. The only requirements we have are 1 HQ and two Troops. You may spend up to a quarter of your points on HQ's and freely fill out the rest of your points with Elite, Troops, Fast Attack and Heavy Support choices.

This leads to really dynamic armies, which in itself is awesome, making the cinematic of the game even more epic.

The bottom line is that 40k is as fun and/or competitive as you and your opponents make it. So free your mind and the rest will follow!
at January 28, 2011 5 comments: 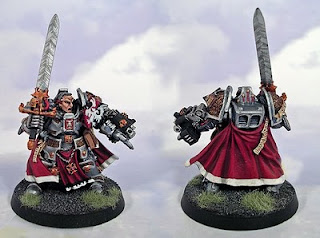 (an old pic of Painting Munky's Brother Captain Stern circa 2006)
A couple of very close friends of mine have started a blog, they are both very accomplished painters. They are also gamers to the extreme, be it miniatures wargames, boardgames, RPG's or video/computer games they have a passion for it.

The Koolest part is that they are Gamer Girls! That's right I know that Unicorns are real! (hey Brent!)

They have just started out so there is not much on the blog, but I know that will change. So do me a favor and jump over to Babes in Gameland and give the Gals a warm welcome to the wonderful world of Blogging. 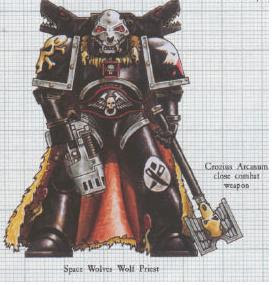 One of my biggest gripes about the Codex Space Wolves is the Wolf Priest entry. They have lost the Apothecary wargear and abilities. This peeves me to no end.

After all Wolf Priests take the roles of the Chaplain and Apothecary within the Space Wolf chapter, being responsible for both the spiritual and physical well-being of their fellow Wolves.

So here in the Man-cave, my depraved mind has come up with the following addition to the Wolf Priest entry.

Wolf Priest 125 points
Same stats and options as the Space Wolf codex with the addition of a Narthecium to his standard Wargear.

The Narthecium allows the Wolf priest and any model in any squad that he has joint to benefit from the Feel No Pain USR from the main 40k rules book.

Notes: to figure the cost of the Narthecium I examined the Codex Space Marine Command Squad entry. It was determined that the Narthecium cost 15 points, but I was placing it on an Independent Character so I bumped the cost up by 10 points.

Two Podcasts in one week

Check out my interviews and announcements on Deepstrike Radio and The Overlords Podcasts this week. Pardon my scratchy voice on the Overlords, I got a case of Laryngitis for my birthday. :(

I talk Killzone and unveil the next major community project that I am joining in on; The Codex Project. I will do a full post and explanation of the project later this week.

Email ThisBlogThis!Share to TwitterShare to FacebookShare to Pinterest
Labels: Podcasts 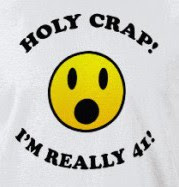 I am getting ready to head out and play a few thousand point games with my buddies. It is my annual Birthday bash today, and we intend to consume large quantities of pizza and alcohol, it should be a blast.

This is the Soul Reapers list I am taking with me.

I'll let y'all know how it goes!

Update: Round one is over!

Narrow victory to the Soul Reapers due to a brilliant (I mean Lucky) last turn seeing the destruction of both Imp Fist scoring units!

Bashed on the Ultramarines Drop pod force. I went second and reserved or outflanked everything! A very satisfying victory, the perfect end to a great day of gaming! 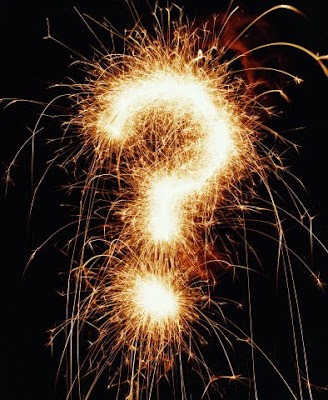 I was talking with Geoff from the Independent Characters via Skype the other day while I was painting some models. I then thought to myself wouldn't it be cool to do a painting day via a Skype conference call. It could be a brilliant way to chat with my blogging and podcast friends from around the world while being productive working on my 40k projects.

We could cover all sorts of modeling and painting related topics. Plus give out real time advice for painting. I think it would be great fun.

So what do you guys think? Wanna join me and give this idea a shot?

Warlord Krüg from the feet up 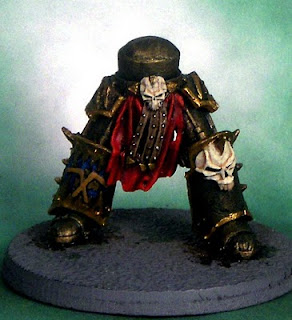 The conversion is complete and the greenstuff dry, it is time to begin painting the king of the baddies!

I will be painting Warlord Krüg in pieces as it will allow me the most freedom to pay attention to the details of this incredible model. This pic above is still very much a work in progress. I have laid down the initial colors and washes. The tabbard is more or less finished.

This part of the model has very little greenstuff work on it. I replaced the Khorne icons on the hip armor with Soul Reapers crossed scythe icons. I also emulated Menzies artwork by adding crossed scythes over the WE icon on the right leg, this is Krüg's personal iconography. 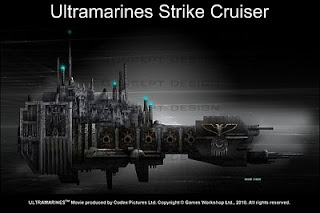 Now let me say right off the bat, I had no higher hopes for this movie to be good "B-rated" Sci-fi. Knowing that GW was not financially backing the movie I knew the movie was going to have a limited budget.

All of you that expected a blockbuster styled movie were just expecting way too much from a small production company with no monetary support from Games Workshop. I also suspect that Dan Abnett's screenplay was butchered to an extent to keep the movie within its budget.

I have watched the movie a few times and must say that I really like it for what it is: good "B-rated" Sci-fi. I enjoyed seeing the gritty 40k world and the Astartes warriors portrayed on my big screen TV.

I enjoyed the details of the armor with each Marine having some variant in the design. I also enjoyed that they showed the mag-locks on the hips of some of the Marines, this was great detailing. The two things that detracted from the Astartes were the withered old faces of the veterans and the massively over-sized Bolters.

Looking at the landscape in the background of the movie, I liked the foggy world aspect, but understand where the complaints of the film makers taking the easy way out on the graphics side of things. While that is probably true, I still enjoyed the limited visibility it gave the heroes of the movie, it did help add to the tension of the story.

I forgive any "Fluff" issues in the movie, as there are almost no films big or small that don't change the background of any story line.

Like I said the Ultramarines movie was good "B-rated" Sci-fi, if you did not enjoy the movie the first time around I suggest that you give it a second look. Viewing with the understanding of what it is "B-rated" Sci-fi.

Face the facts, this is as good as we are going to get if GW does not finance the movie or license the IP to a big production company. If we embrace these early movies GW may just feel the need to make a proper money making feature film.

Well that's my two pennies worth!

My plans for the blog this year 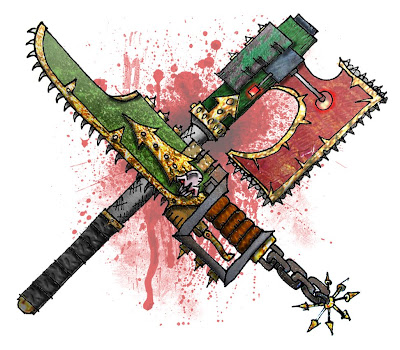 Here are some of the things that I want to complete in 2011.

First off, I want to complete the Soul Reapers rebuild. I need to buy some stuff to finish the rebuild as some of the donations seem to have fallen through. I don't have any ill feelings about it, crap happens, I do understand.

Second, I'll be adding more killzone coverage on the blog. I had planned on doing this from the get go, but life got completely in the way.

Thirdly, I'll be revisiting and updating the Vehicle Design rules from 3rd edition, then sharing the results with you my humble readers.

Fourthly, I plan to create and run a themed narrative hobby event sometime late in the year.

Fifthly I would like to get going on my Space Wolves reboot at some point! I had been waiting for the hype to die down, but that seems like it was complete folly now.

I have two more things that will be coming in the near future, but will leave them unnamed until I am closer to the final product. 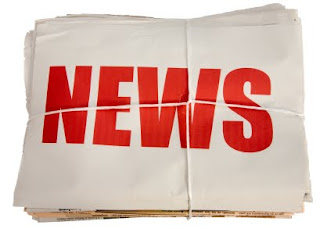 Regular posting will resume tomorrow, I have finally recovered from the foul virus that has kept me away for the last few weeks.