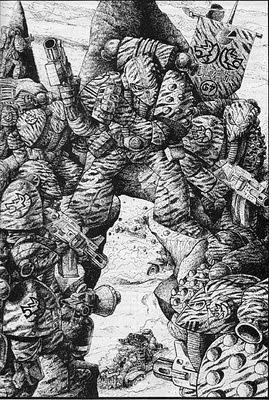 I have decided to create a new set of house rules for skirmishes in 40k rather than going through the headache of melding two incompatible versions of Kill Team together.

Special Operations Battles will be a set of fan created rules for running skirmish games within the Warhammer 40,000 universe. (These rules will be very similar in nature to the original Kill Team rules from fourth edition.)

The rules when finished will be as extensive and as mutable as anyone wants to make them. There will be basic and optional advanced rules to use in your battles.

Special rules will include a rule similar to every man for himself, as that makes for great skirmish gaming. The following three rules will make the cut with only the first guaranteed to be a Basic special rule.

Team Leader: Pick one model from your army to be the team leader, preferably an appropriate model; if available a squad leader would be perfect. This model gains +1 wound and all models within 12 inches may test on his leadership.

Grenades: Any model armed with grenades may throw them with a range in inches that is double their strength statistic. Frag grenades have a small blast template and may be thrown at anything. Krak grenades and Melta Bombs may be thrown at vehicles and fortifications, they have no blast.

Priority: Each player rolls a D6 at the beginning of each turn to see who goes first for that turn.

Players will pit their Special Operations Groups (SOG) against one another as they attempt to complete missions vital to overall victory, in a way that you just could not replicate in a normal game of 40K. The members of these groups are the unsung heroes of every war.

There will be two ways to play a special operations battle game.

The first is in a narrative campaign setting, with predetermined missions and objectives driving the games along the course of the story.

Both players build a special operations group using the codex for his/her army of choice.

Each team has a 175-225 point limit and can contain anywhere between 5 to 15 models in total. Teams purchase individual models from the Elite, Troops, Fast Attack and Heavy Support unit selections in their codex. A little basic math skill will be required to figure out some individual points costs.

For example a Marine Tactical squad sergeants cost is determined by subtracting the cost of the 4 standard marines from the squads base cost. So the cost for the Marine sergeant is 26 points. (90-64=26)

A team may contain no more than 4 ranged weapons upgrades; only two may be a heavy weapon upgrade.

No vehicles are allowed with the exception of Walkers and only if they have an armor rating of 33 or less. Armor rating is determined by adding the 3 armor values (FA/SA/RA) for your vehicle together.

A team may contain no more than two 2+ armor saves and/or two 3+ invulnerable saves.

No more than two bike, jetbike or cavalry models may be included in a team.

No model may have a toughness statistic greater the five.

There will also be purchasable "Team Member Upgrades", that up to four members of a team may purchase a single upgrade.. Each upgrade is purchased out of the teams 175-225 point limit and may only be purchased once per team.

So these are the unrefined rough ideas, that I have as it stands now. I figure that giving the team some structure during the building phase is a good thing. Allowing Jetbikes was purely for any Necron players out there, in the spirit of fairness I allowed for regular bikes as well.

Next week will be Special Operations week here on Galaxy in Flames as I outline the idea adding more of the meat and potatoes for the project.
at July 23, 2010