The revival of the Mutant Chronicles universe on the tabletop is quickly approaching retail release via Warzone Resurrection. I am pumped about it for many reasons. First off this is my second favorite Sci-fi gaming universe, it is well written and has a compelling setting. Secondly I got to lend a hand in bringing this property back to life. 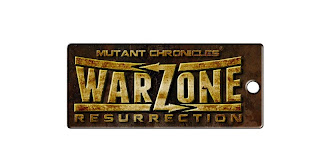 I was talking with the guys at Prodos Games asking them copious questions about the design of the new system. We talked about all sorts of things including the desire for everything about Warzone Resurrection to be very dynamic, from the miniatures to the rules, right down to how the table could interact with the armies during game play.

Prodos Games had chosen a very aggressive release window and I knew that they could use all the support they could get. I had mentioned many different ways that other games had done including the very dynamic mission system that had been created for Special Operations Killzone (my unofficial 40k fan skirmish game) as something they might want to look at to get ideas for something inspiring for Warzone’s gameplay.

They mulled over their options for a few weeks; I was eagerly waiting to see what they had come up with, when I got asked to help create a similar mission system for Warzone Resurrection; they mentioned what bits they were keen on and which they were not. I was totally stoked at the opportunity to help bring back the game with a very dynamic way to play games.

I decided against trying to reinvent the wheel, and took the baseline content from the Killzone missions as a starting point. First thing I did was strip out the 40k from them and the less liked bits, which was extremely simple. Callous disregard and desperate gamble were scrapped in favor of a tiered difficulty system.

So I went about setting up a tier system allowing players to determine how in-depth they want their games to be. There are 4 tiers Alpha, Beta, Delta and Epsilon levels each one adds another type of mission objective to the game. Delta is the most in-depth and difficult of the mission tiers with three distinct missions to complete over the course of a game.

Next I tackled the missions themselves. I started by tweaking appropriate KZ missions, in the end there are 10 Priority missions, 6 secondary missions and 9 Corporate Agenda missions.

I compiled all this hard work together and sent it to the guys at Prodos and they were thrilled. Then it was on to playtesting and tweaking, although there was very little tweaking to be done, thank goodness.

I want to give a hearty thanks to all the people past and present that have helped with Special Operations Killzone, especially Brian (my long time partner in crime and terrain maker extraordinaire), Joe and Vlad who were instrumental in the creation of the current mission system out of the more complex earlier versions. So thanks again guys, without you SO Killzone would not have enjoyed the success that it has.

I have not made any money from this great undertaking, but I have been more than happy to aid in bringing back a fantastic universe to the tabletops of the globe! Although I did get a pair of pre-release Razide minis and my name credited in the Warzone Resurrection rulebook, which is cool beyond words.

So while I may have been down and out from actual hobbying, I found a way to contribute to the community.Thank goodness for this project it literally kept me from going crazy during the worst part of my recovery.

Until next time, keep your powder dry and lead flying!
-Jim
at November 22, 2013