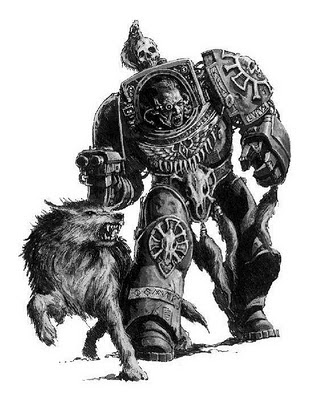 Here is the third and final of the Space Wolves Heroes of Antiquity special characters. He is by far one of my favorite 40k Characters of all time.

Ranulf is fabled to be the largest warrior that the Space Wolves have ever had. He is said to rival Leman Russ in his height and strength of arm. His massive Terminator armor now stands in the Hall of Heroes looming like a beast over all that look upon it.

The Saga of Ranulf’s death is told at great length and greatly revered by Space Wolves of any status. The Space Wolves were retreating through a narrow mountain pass, following a rare defeat by a Warhost of Orks. Ranulf and a handful of Wolf Guard stayed behind to face the Orks and facilitate the escape of the rest of the Space Wolves forces.

They made a gallant stand against the whole of the Ork host, Ranulf chose his ground wisely. This part of the pass was so narrow that the Orks could bring no more than a dozen warriors into combat at any one time against the Wolf Guard. The battle raged for many hours, the bodies of the Orks were piled as high as a wall. One by one the Wolf Guard fell, until only Ranulf was left standing alone. Though the Orks brought down the mighty Ranulf in the end, they could not bring themselves to desecrate his body.

When the Space Wolves finally retook the pass they found Ranulf and his dead companions seated in a hastily constructed shrine surrounded by an immense pile of Ork wargear. To the Space Wolves Ranulf was a great champion, but to his foes he became nothing less than a god.

Might of Russ: If Ranulf loses his last wound do not remove him, but instead place him on his side At the start of the next Space Wolf turn roll a D6 on the roll of a 3+ Ranulf staggers back to his feet with a single wound. If Ranulf would be placed in base contact with an enemy, place him so that he is more than an inch from any enemy models. On the roll of a 1 or a 2 Ranulf is removed as a casualty.

Great Strength: Ranulf is incredibly strong even for a Space Wolf. All of Ranulf’s Power Fist attacks have the same effect as a Thunder Hammer.

Leader of the Wolf Guard: Ranulf is the leader of his Great Companies Wolf Guard. There must be at least one unit of Wolf Guard in the army to field Ranulf.

I'd like to give special thanks to Bradimus Prime from the Space Wolves blog for helping me figure out what to do with Ranulf. Thanks again Bradimus!
at April 02, 2010