Not Enough Terrain Syndrome or NETS 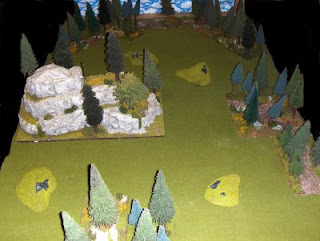 Disclaimer: the table pictured above as an example has about 30% terrain on it, if you remove two of the forest sections then it would be close to 25%.

I’ve been planing to do this article for a while now, I’d like to thank Magilla over at The Art of 40K War for re-igniting the fire with his excellent post on terrain.

Do you feel that if you lose the first turn you are at a disadvantage?

Are you constantly fielding transports that you never deploy from, because the troops inside will just disappear if they don’t have the armored shell?

Do those Assault troops ever make it into combat or are they shot to pieces before they get to turn two?

Are those long ranged support units shooting you with clear shots to most of your deployment zone, while sitting at the back edge of theirs?


If you answered yes to more than one of these questions then your gaming group may be suffering from a severe case of Not Enough Terrain Syndrome or NETS?

Are you sure that you are using the amount of terrain suggested on page 88 of the MRB? The MRB suggest that roughly twenty five percent of the table should be covered in terrain.

Next time you go for a game try filling a quarter of the playing surface with varied terrain pieces. Then spread them out one at a time with your opponent. Then if the table looks like it does any other game you play congratulations you have been adhering to the rules suggested in the MRB.

If it feels like too much terrain then you my friend have a severe case of NETS. Don’t feel bad though because you are not alone. I’d venture to say that 85 percent of tournaments and gaming stores get it wrong all the time. I don’t completely begrudge them for creating this problem, as terrain is expensive to by and time consuming to build.

It still doesn’t change the fact that they are skewing how the game is played. My suggestion is to do what I am doing locally, ask for more terrain on the tables. There are a few ways to accomplish this, first offer to help organize a terrain building day to get more available. Second get the local guys to help out by bringing in a single tables worth of terrain to be used in the events of the day.

Trust me it is worth the effort to get the proper amount of terrain on the table. It helps bring better tactics into the game and it might just convince you to change up your list a little.
at October 02, 2009