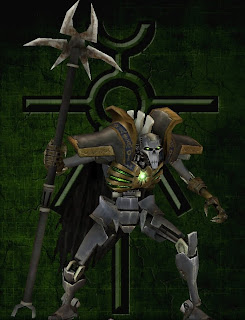 So my buddy and I have been wracking our brains for an effective list for the Necron army. As you may know the Necrons took a really big hit with the release of 5th edition 40k. It’s not that he wants to go win tournaments with Necrons, but he does want to have a competitive chance of winning most games.

In passing this afternoon he mentioned making an update like I am doing for the Soul Reapers. Then a like a bolt of lightning I remembered that the Guys at Dice Like Thunder my favorite podcast had made an updated Necron list in their latest campaign setting, The Forge Star.

It’s a really groovy list, it removes the Ctan but you gain three new Necron Lord choices! It also has a lot of nifty tweaks to a little more than half of the armies entries. So if you have a Necron army and want to have a lot of fun with your friends check it out!
at October 21, 2009