I have been debating what theme I have wanted to have for the bases of the Soul Reapers. I new I wanted some ancient ruins in the theme, but I also like the idea of a rocky mountainous theme too. So it has been a struggle. I did order a smattering of Dragonforge bases, and they are fantastic. I just took a major hit to my disposable income with my new job and it will just cost more than I am willing to spend on bases to outfit 2/3rds of the force with them.

So I have decided to make my own custom bases combining both themes, using plasticard and cork for rocks. (I was already using some cork on my bases.)

The over arcing theme of the bases will be fighting over some lost city hidden in a forgotten mountain rage somewhere on the Eastern Fringe. Which fits the search for the Artifacts of Salmora background of the Warband.

Here are the unpainted Gore Daemons on the first examples of the new basing. I think they will work great, they are just a little labor intensive to build. 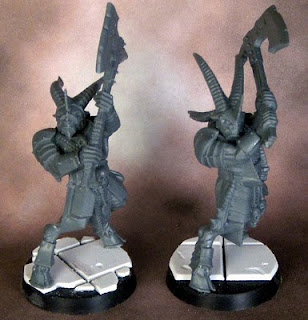 One of the Gore Daemons carries the Icon of Salmora a powerful artifact that will be added to the next update of the mini-dex.
at October 08, 2010