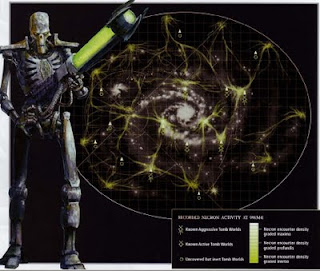 Three more down! Let me know if I missed anything.

Plasma Grenades: all elder models may take plasma grenades at a cost of two points. They may be thrown just like other grenades and have the following stats: Strength 4 AP4 small blast.

Harlequins: due to the change in the movement rules, I have decided that they need a perk from their flip belts. Harlequins move 7 inches in a normal move, may run 14 inches and are never hindered by difficult terrain.

Exarch Powers: Powers that affect the Exarchs squad use the Area Effect rules. All models from the Exarchs Aspect within the area of effect gain the bonuses from the powers.

Weapons Platforms: Place both of the gun crew in base contact with the weapon: the weapon and team count as a two wound model.

Wraiths and Scarabs move as jetbikes, but don’t count toward the jetbike limit.

All Necrons that are able to make a We’ll Be Back roll may do so as long as there is another team member of any type with the Necron rule within 6 inches.

Rubric Marines within 6 inches of a Sorcerer act under command.

Squad upgrade Icons use the Area Effect rules, a model may only be affected by one icon at a time; so no stacking. Cult Marines gain no bonus from Icons.

Possessed roll for their Daemon kin before deployment.

Lesser Daemons start on the table unless the scenario allows deepstriking, if it does they must be held in reserve.
at August 14, 2010