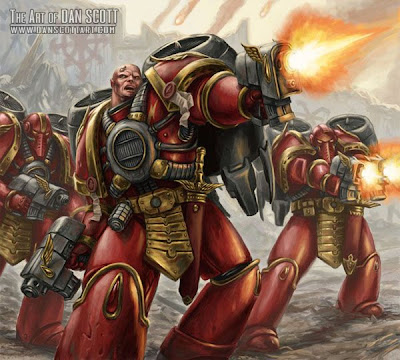 I am wondering if the non-Codex chapters of Space Marines should have more freedom to show their unique style in Killzone. I have been really focused on trying to keep the scenarios and teams balanced, that I may be handicapping the flavor of the non-codex chapters.

I have to thank AbusePuppy for bringing this up in the Space Marine Errata comments.

If you look at the Killzone force building guidelines you will see the following restrictions.

A team may contain no more than two models with 2+ armor saves.

A team may contain no more than two models with Jump Packs.

A team may contain no more than two bike, jetbike or cavalry models.

These are the three restrictions I am debating making mutable for the different non-codex Chapters.

Blood Angels may forgo the option to take two bikes; this will allow them to take two more Jump Pack equipped models. Increasing them to a total of four Jump Pack models.

Space Wolves may forgo the option to take two Jump Packs; this will allow them to take one additional Bike/Cavalry models and one additional 2+ armor save model. Giving them a total of three in both categories.

I am open to suggestions on Black Templars should we follow this route to fruition.