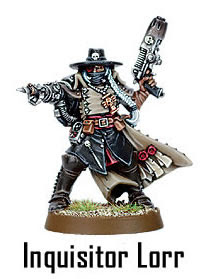 I am certain I have missed something, so please feel free to bring up any issues that I may have missed.

An Inquisition Team may contain one Psyker.

Inquisitorial Retinues: to gain the benefits from the retinue they must be within 4 inches of the Inquisitor. They work as written in the codex as long as this requirement is met.

The Auspex and Targeter entries are ignored; if you want these upgrades use the Killzone versions.

No Orbital Bombardments of any kind.

Your team may only include one Officio Assassin.

Your team may include one Death Cult Assassin.

No Allies: at the scale that Killzone represents the operatives of the Inquisition are enough to complete their own tasks.

Grey Knights
You may choose to have your one Psyker be a Grey Knight Brother Captain Terminator.

Standard Grey Knight Terminators are not considered Psykers and have no powers.

Adeptus Sororitus
Here are the rules for faith points and their acts of faith. (these may change but it is a start.)

ACTS
HAND OF THE EMPEROR
Praying to the Emperor to channel His wrath through their bodies, the Sisters strike down their foes with preternatural strength.
Cost: 3 Faith Points
Effect: Each model within 4 inches adds +2 to its Strength, but will strike at Initiative 1.

THE PASSION
The faithful leap and weave through the chaos of melee, striking at their foes with a speed born of their holy fervor.
Cost: 2 Faith Points
Effect: Each model within 4 inches adds 2 to its Initiative. May not be used in the same phase as Hand of the Emperor, and does not override weapons that always strike last or at Initiative 1, neither does it change the effect of any type of grenade.

LIGHT OF THE EMPEROR
The Sisters are filled with the knowledge that the only thing they need fear is failing the Emperor of Mankind. Armed with such faith, the enemy holds no terror for them.
Cost: 2 Faith Points
Effect: Each model within 4 inches becomes Fearless, which means that it will automatically pass any leadership tests it is required to make.

SPIRIT OF THE MARTYR
The Sisters’ prayers steel their bodies against the weapons of the enemy. They will die when the Emperor is ready to accept their souls, and not a moment before.
Cost: 3 Faith Points
Effect: Each model within 4 inches gains a 4+ Invulnerable save.

(Many thanks to Bestia from the Imperial Truth for the help with these.)
at August 13, 2010