This week in Killzone II and Soul Reapers update 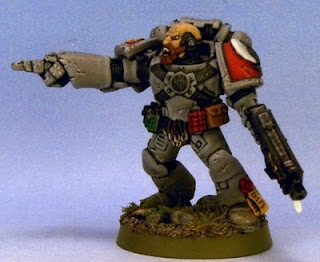 It has been a hectic real life week for me, but I have still been able to get a few things done for Killzone.

First up the Killzone Rules Committee has been formed. It consists of the following gamers, bloggers and hobby enthusiasts.

AJ from the Imperial Truth podcast blog
B.smoove from A Gentleman's Ones
Karitas from Excommunicate Traitors
Menzies from the 512th Cadian
Sons of Taurus from his self-titled Blog
Suicide Badger from MAWS 40k
Counterfett from All things Fett
Geoff from the Independent Characters Podcast
Master Bryss
Entropomancer
War009
Marko

The Killzone also has support from the following Podcasts

The 11th Company
The Imperial Vox Cast
Dice Like Thunder


The first thing we will be working on is tightening up the rules and errata that have already been done on Killzone. The intent is to make the basic rules ironclad, since so many have expressed an interest in doing Killzone tournaments.

Once this is done we will move on to the wackiness that will be involved in the Optional Advanced Killzone rules.

Campaign system: The ground work for the campaign system has been laid, we will be building upon this foundation over the next few weeks. The goal is to give a simple yet elegant way to fight campaigns with out getting bogged in overly complicated mechanics.

Soul Reapers Update
All playtesting and updates on the Soul Reapers Mini-dex are on hiatus until November. In November it will enter the final stages for publication. Culminating with the release of finished PDF around my birthday in January 2011.


Thanks for the continued support!